Fungus living in the walls of a failed nuclear reactor in Chernobyl was found with high melanin content, implying it survived living under dangerous radiation. Fungus might be a possible food source in high-radiation places like outer space. 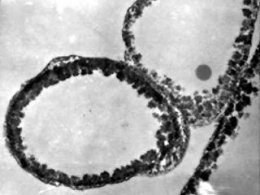 Black fungi were found on the walls of Chernobyl’s damaged and high radioactive nuclear reactor by the robots sent to find the area. After that, scientists analyzed the fungus and found that it contains high levels of melanin, a pigment that is present in the human skin and that gives color and is protected from sun and ultraviolet radiation.

Melanin is found in many types of mushrooms. Scientists say that melanin is found in the fungus and that humans are similar in chemical composition. Nuclear (and other high-energy) reactions reveal particles that can damage ionized radiation, dangerous rays, and genes, thereby causing mutations and ultimately cancer. However, they develop under the same conditions as fungi.

Ekaterina Dadachova at the Albert Einstein College of Medicine explained the reason why fungi thrived in Chernobyl: She said just like pigment, chlorophyll converts sunlight into chemical energy that allows green plants to live and grow. Melanin helps the fungi to benefit and grow ionizing radiation.

Researcher Arturo Casadevall, an immunologist at the Albert Einstein College of Medicine in New York said to LiveScience. “In general we think of radiation as something bad or harmful. Here we have a situation where these fungi appear to benefit, which is unexpected”

So, the researchers wanted to test this theory and see whether it is reproducible. They did experiments on three species of fungi and found that ionizing radiation significantly boosted the growth of fungi that contained melanin.

In the original article, the researchers Dadachova et al showed that ionizing radiation changes the electronic properties of melanin, and enhances the growth of melanized fungi. Thus, the growth of any mushroom species containing melanin occurs in the presence of ionizing radiation. These are not mutant fungi, but ordinary mushroom species everywhere. Some are common molds while growing in the basement or bathroom.

So these fungi don’t actually feed on radiation, they change the melanin properties, so that it can be converted into energy for growth. Think of radiation as an enzyme that allows melanin to be “digested”. Effectively, it’s the same thing, though.

In this article, Dadachova and Casadevall discuss the radiation tolerance of fungi and its role as an adaptation mechanism. There is evidence of the widespread prevalence of melanized fungi in the early days of the Earth, where radiation is at a higher level than it is today.

Anyone who follows radiation measurements of foods in Chernobyl and Japan knows that the worst radioactive contamination in any foodstuff is in the fungus. Mushrooms are very efficient in absorbing radionuclides. They actually eat something.

Researchers in Turkey found that cesium-137 (from Chernobyl) accumulates more in oak bark than even lichen (which had been thought to be the most contaminated life form). Professor Mori of the WINEP blog showed an autoradiograph of how radionuclides were found in oak bark. Many mushroom species grow on these barks.

“The researchers exposed two kinds of fungi – one that naturally contained melanin (Wangiella dermatitidis) and another that scientists induced to make the pigment (Crytococcus neoformans) – to levels of ionizing radiation about 500 times higher than normal, the doses one might see at high altitudes. Both species grew significantly faster, findings detailed in the May 23 issue of the journal PLoS ONE.”

Although fungi seem to thrive in nuclear radiation, they don’t clean it. They are only able to harness the energy that radioactive materials give off.

Scientists say this ability of fungi to live off ionizing radiation could be useful in space. Dadachova said: “Since ionizing radiation is prevalent in outer space, astronauts might be able to rely on fungi as an inexhaustible food source on long missions or for colonizing other planets.”